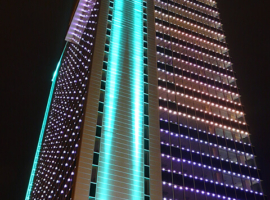 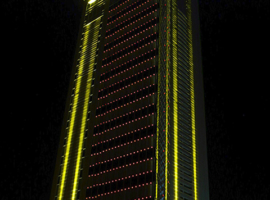 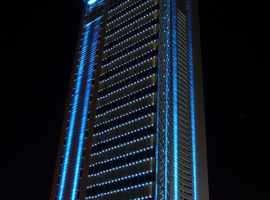 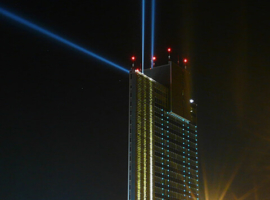 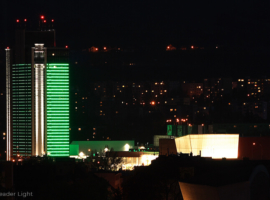 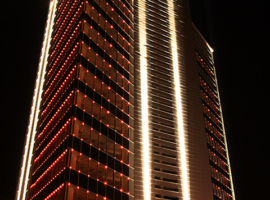 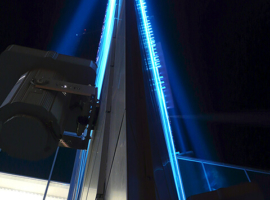 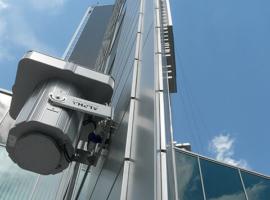 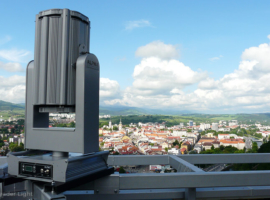 Recently the installed façade illumination of the Europa Business Center (EBC) has been enhancing the night skyline of the Slovakian city of Banska Bystrica. The project by Leader Light turns the 87-metre-high façade of the building into an impressive nocturnal backdrop with constantly changing colours. The Xenon equipment purchased for this project was supplied by the internationally active lighting specialist A&O Technology to its Slovakian distribution partner.

On the façade of the Europa Business Center, Leader Light installed a total of 3,420 specially produced LED DOT Z-POWER OneChip RGB fixtures as well as eight FALCON® STATIC ARC colour 2000Ws and three FALCON® BEAM ARC whites. The STATIC ARC colours are arranged along the façade in two groups of three and one of two in such a way as to illuminate the areas near the window fronts as uplights. With their regular colour changes they are able to work striking static effects on the façade. The FALCON® BEAM ARC whites are installed on the roof, whence they can project geometric figures into the night sky.

The LEDs are positioned at the corners of the windows and form in their overall constellation a coarse LED network on the wide sides of the facades of the EBC. The LED net serves as a projection wall capable not only of changing colour but also of playing back video featuring graphic forms and patterns as well as script. For this purpose, one wall has been studded with 2,280 LED DOT Z-POWERs and the other with 1,140 LED DOT Z-POWERs. Each of these LED pixels is made up of four OneChip LEDs. The entire installation – the Xenon luminaires as well as the LEDs – is controlled by an e:cue system.

The EBC is what is known as an intelligent building and is therefore equipped with state-of-the-art equipment that complies with the strictest safety standards. With 22 floors above ground plus the basement, the building boasts over 5,128 square metres of floor space.

Since March 2008, a new web site ( www.wwpp.eu ) devoted to the cooperation between Leader Light and A&O Technology, on which the mutual distribution partners present their cooperation as World Wide Project Partners, has been online.