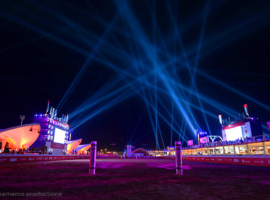 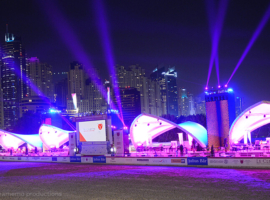 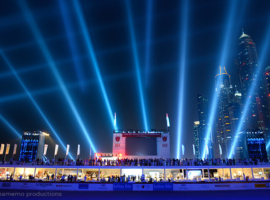 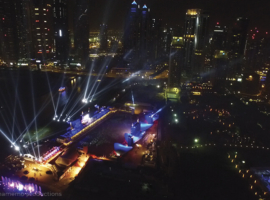 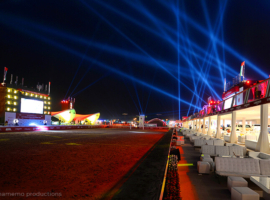 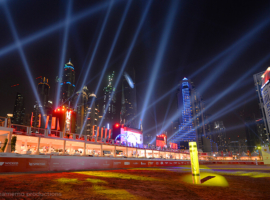 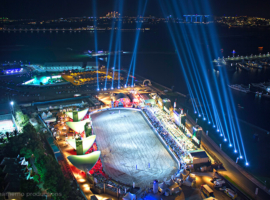 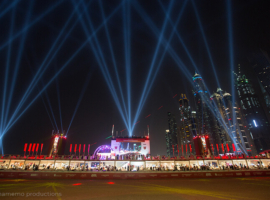 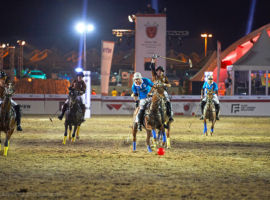 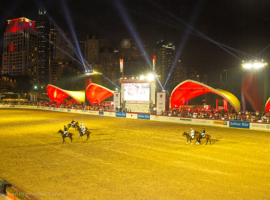 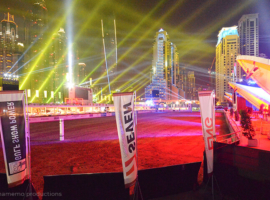 April 2015 – As event partner of the Beach Polo Cup Dubai, A&O Technology created spectacular special effects with its FALCON luminaires and the FALCON Video shone in a new formation.

In a formation never before seen, the FALCON VIDEO luminaires framed the arena’s giant LED screen to create a LED wall. The hybrid searchlights were therefore in use throughout the event as a fixed component of the installation. Newly arrived in the UAE, the FALCON BEAM 2 drew gigantic tornados of light in the sky. At the same time, FALCON FLOWERs created flowers of light for the video projection. A&O Technology offered with its equipment particularly brilliant effects for this prestigious equestrian event. Lighting designer Sonu AB realized the creative and lighting concept of the show, which was developed by mamemo productions under the leadership of creative director Sam Katiela.

“Beach Polo Cup Dubai is a prestigious event combining first-class sport with high-end show elements and entertainment,” commented Marco Niedermeier, CEO of A&O Technology. “A&O Technology is proud to have been able to present the FALCON VIDEO in an unprecedented formation, thereby contributing an impressive light show to the production in the event arena.

The Beach Polo Cup Dubai 2015 was held for the first time this year under the official patronage of HH Sheikh Hamdan Bin Mohammed Bin Rashid Al Maktoum, Crown Prince of Dubai and Chairman of the Dubai Sports Council. Team Cadillac were the eventual winners.

Dubai, May 2014 – For the 10th edition of the Beach Polo Cup Dubai, event partner AO Technology supplied FALCON® searchlights to illuminate the event arena on the premises of Skydive Dubai and provide special highlights.

To mark the 10th anniversary, the organizers, mamemo productions, directed by Creative Director Sam Katiela (the founder and organizer of Beach Polo Cup Dubai), put on a tremendous show. This was the first time the event had taken place at night. AO Technology illuminated the playing area against the magnificent backdrop of the Dubai Marina skyline using SKY FALCON ARC searchlights as floodlights. They were equipped for the purpose with special lenses to provide an illumination corresponding to natural lighting conditions. Meanwhile xenon searchlights created a canopy of light above the playing area. Each time a goal was scored, FALCON FLOWER searchlights created a multi-beam flower effect.

It was in Dubai in the Arabian Gulf in 2004 that beach polo was born. Now the game is played in over 30 cities worldwide. The custom-designed Beach Polo Arena at Skydive Dubai is the largest of its kind in the world. The Julius Bär Beach Polo Cup Dubai took place on 11-12 April. After a thrilling duel in the final, Mohammed Al Habtoor and his team VistaJet Bombardier succeeded in dethroning defending champions Julius Bär, led by his brother Rashid, to lift the trophy.